Digital media holds the power to make a Star out of a ‘nobody’!

Malyalam teenage actress Priya Prakash Varrier has become an overnight sensation due to the small 26 seconds video that is doing the rounds of Facebook and WhatsApp. The video is an extracted part of the song ‘Manikya Malaraya Poovi’ from the movie ‘Oru Adaar Love’ which is slated for release on 5th March, 2018.

The video captures a scene from the song which shows Priya very cutely winking at a boy from her school. The video encapsulates the topic of naughtiness and love which is currently on top of the minds of people as Valentine Day is just around the corner. The timing of the video is the simply impeccable. It couldn’t have been more well timed that now.The video has gone viral, so much so that it has made Priya a star of sorts within no time. People are smitten by her cute expression and mischievous gesture of winking at the boy. They are curious to know about her and searching information about her online. This is further boosting up the video views as well as popularity for the un-released movie. 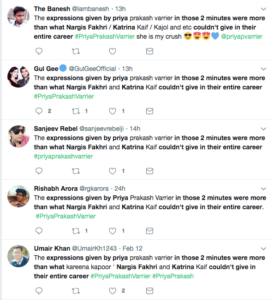 The popularity of the video can be judged from the fact that many people have put it up as their WhatsApp status. Someone tweeted that, “Let’s make her a national crush”. While some declared in their tweets that Priya has better acting skills than other leading actresses of Bollywood by saying that, “Expressions given by Priya in those 2 minutes were more than what Nargis Fakhri, Katrina couldn’t give in their entire career”.

Then there were others who jumped the popularity bandwagon and made thousands of memes and edited video versions with top politicians of the nation in it. All this happened over the weekend and stories began emerging from all sides about the allegiance of Priya to a particular party. Well, we Indians are good at cooking up stories and making a mountain out of mole!

Priya is getting featured across the media spectrum as if she was a big star. She confessed that she is
feeling overwhelmed by the tremendous response that this innocent video has received and that she is
finding it difficult to cope up with the sudden attention that she is receiving from all over the country as
well as from Indians settled abroad.

The makers of this video have to be thanked for giving us such a perfectly timed and such a cute video.
Priya definitely owes her overnight fame to the video editors, social media platform and the people in
general who lapped up this video with open arms.

This video is a classic example of how social media truly rules the popularity space and how it can make
someone a digital sensation in a matter of days.